How to Delete Negativity: Tips From the Expert Behind #ICANHELP 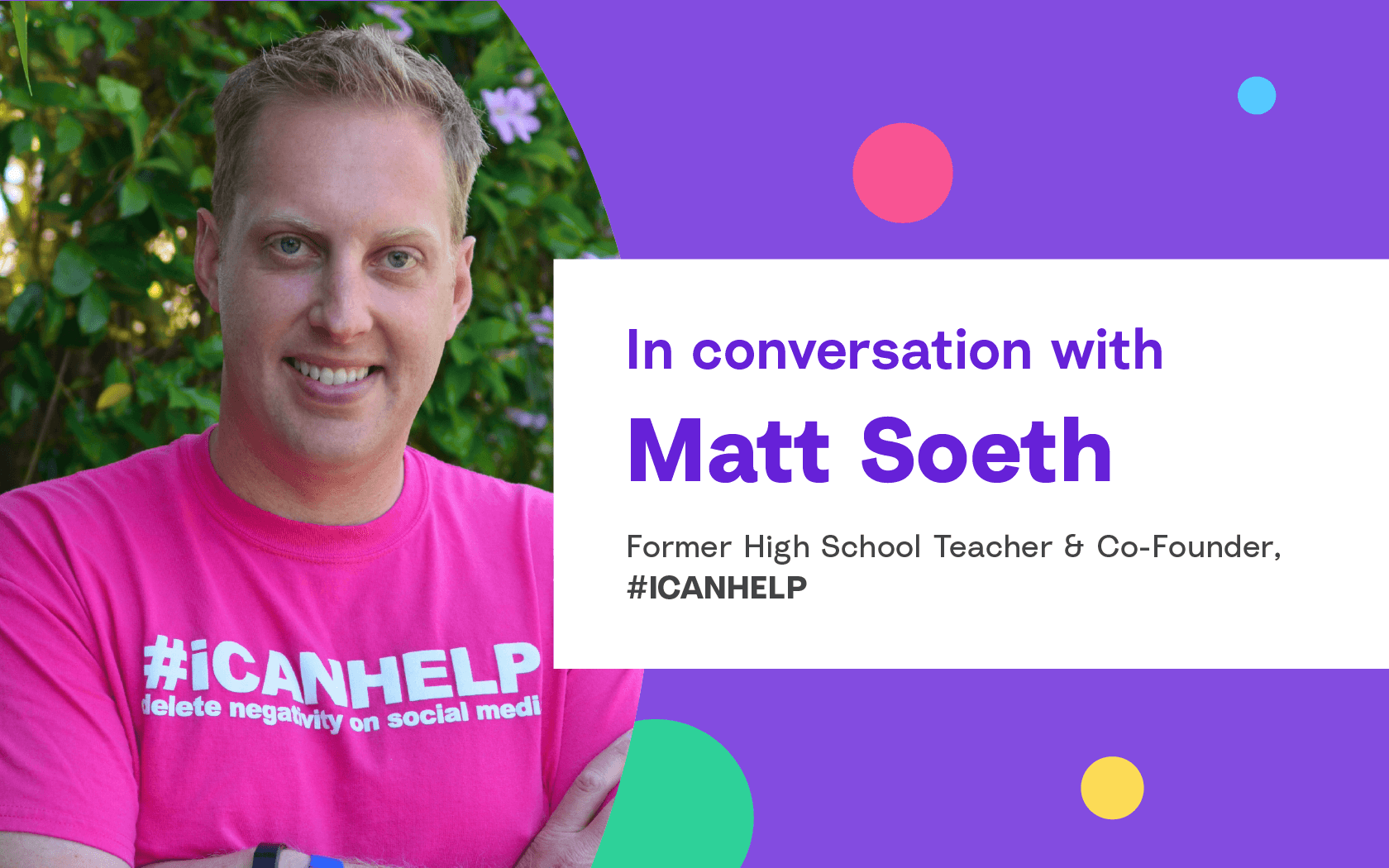 When it comes to headlines about social media, it can feel like there’s a lot of doom and gloom out there. But Matt Soeth, co-founder of #ICANHELP offers us something different. This organization helps teens and educators combat cyberbullying—and make the internet a more positive place. A former college basketball coach and high school teacher, Matt now dedicates his time to supporting educators and empowering students. We sat down with him to learn more about #ICANHELP, and hear about some of the positive ways kids are using technology today.

Tell us how #ICANHELP got started.

Within my first year of teaching, my administrator asked me to take over our student activities program. I was involved in school culture, creating positive events and promoting student-led activities. We tried to create a place where kids felt accepted and like they had a say.

I then got the chance to open a brand new high school and that’s where I started #ICANHELP with my co-founder, Kim Carr, after an incident at the school she was working at. She called me about a negative social media page posted about a teacher. It had over a thousand followers and was live for two weeks.

This was in the early days of social media, so reporting tools were not great and no one really knew what to do. So, we just started having conversations and the kids started talking. One student found out who made the page and it got taken down. A year later, someone made a fake Instagram account about the same teacher, but this time the page had zero followers, and we had over 30 students comment in support of the teacher. The page came down in less than 45 minutes.

By 2013, we were seeing the rise of cyberbullying, confession pages and a lot of anonymous apps. And we noticed that kids were tired of being afraid. They were tired of worrying about drama. And, as good as the reporting tools are, knowing what to say and how to speak up—that’s where #ICANHELP comes in: teaching kids that if they see someone getting bullied, there are things they can say to support them, either directly on the account, privately through direct messages or in person. Even just asking how they’re doing can remove that social awkwardness that comes from being a bystander.

We set out to empower kids and so much of the narrative up to that point was about scaring them into doing the right thing. (click to tweet)

My last year in the classroom was 2015 and we had a situation around homecoming after the junior and senior girls played a flag football game. That night, someone started an anonymous burn account on Twitter and the next morning my kids came in and told me about it—but I couldn’t find it. It turns out that enough kids had seen and reported it the night before. And I think that’s the dream scenario—young people as digital first responders.

We’re not going to completely eliminate cyberbullying, but I think there’s a lot we can do to reduce it and give kids the right tools to reduce the stress, drama and anxiety that comes from it. (click to tweet)

The demand for #ICANHELP was there, and my co-founder and I have presented to over 450,000 students across 15 states in the US and a couple of provinces in Canada.

What is the biggest change you’ve seen in the online landscape?

One of the biggest shifts is that we have a lot more research than we used to. And I love that there’s a shift towards looking at the human component.

I’ve also seen a huge shift in looking at policy and trying to hold companies accountable. We’re a member of the Twitter Trust and Safety Board, and we’re able to work with some of these big players and we’re trying to bring kids in on the conversation. The more we can bring companies and users together to have those harder policy and user safety conversations, the better.

Another shift is this idea of safety by design. There’s a conversation about ethical tech use rather than, “Let’s make it and get as much money as we can and then we’ll figure out how to make it safe.” Now people are looking at how to make something safe before they push it out.

When it comes to tech, what do you think kids are most concerned about?

People use a reporting tool about 18% of the time. And for young people, if they report something—whether it’s in school or on a platform—they want to know that something is going to happen. So, a big part of our conversation with companies is about building something into their system so they can at least tell me what’s happened if I filed a report.

And if I’m a student going to the Vice Principal about a kid that’s bullying me, I need to know that it’s going to resolve itself appropriately and that I’m going to feel safe and not become more of a target because I chose to speak up. Kids even get stressed out when they see others being bullied. There’s some research suggesting that if you witness someone else being bullied, that could have a negative impact on what you think of yourself. If a kid is in a classroom and some other kid is getting paper chucked at him, sometimes they don’t say anything because they don’t want to be a target. That alone can have a negative impact on their sense of self.

Kids want a voice and they want to feel supported, and that’s where the hashtag #ICANHELP came from. They can use it as a signal. They’re going to see it and other people are going to see it—and they know that we can do something and make it better.

In the spirit of #ICANHELP, what are some positive ways you see kids using tech today? And what can we do to help more kids have a positive impact on the world?

There are so many! We’re entering our fourth year hosting Digital4Good and every year we take around ten students that are nominated by their peers and give them a chance to tell their story. We’ve had a 16-year-old who developed an app to identify first responders in a geographic area. If there’s an earthquake, fire or tornado, you can open up this app and it identifies police, paramedics, fire departments—whoever is in the area who can come assist with that emergency.

We had a junior in California who, with a bunch of his friends, 3D printed a robotic arm for a local army veteran who lost his in the Middle East. He wanted to throw and catch a softball, so they made an arm that would do that for him.

We had one girl that was more social media focused and she wanted to change how women of color were being portrayed. She started the Woman of Color Project where women of color from across the US and beyond could post photos and do story takeovers showing a day in their life. She was really interested in representation on social media and she wanted to change the narrative with @projectWOC.

And, at a high school in Anaheim, two students started Humans of Loara, an account featuring students based off of Humans in New York. And over the course of the year, this became so popular they started doing staff and alumni. Most recently it turned into a YouTube channel—and it was all just about telling positive stories.

And at the same school, a group of sophomores started a podcast called Teenage Therapy. It’s about the experience of being in high school, and it’s a very diverse group—male, female, LGBTQ, students of color—and it’s just talking about high school and how it relates to their mental health.

Young people are trying to put something out there that challenges the status quo and solves a problem. At #ICANHELP, we’re trying to amplify those stories because there’s so much more good than bad, and we don’t hear enough about that. (click to tweet)