How to Combat Cyberbullying: Tips from the Expert Behind Bullying Ends Here 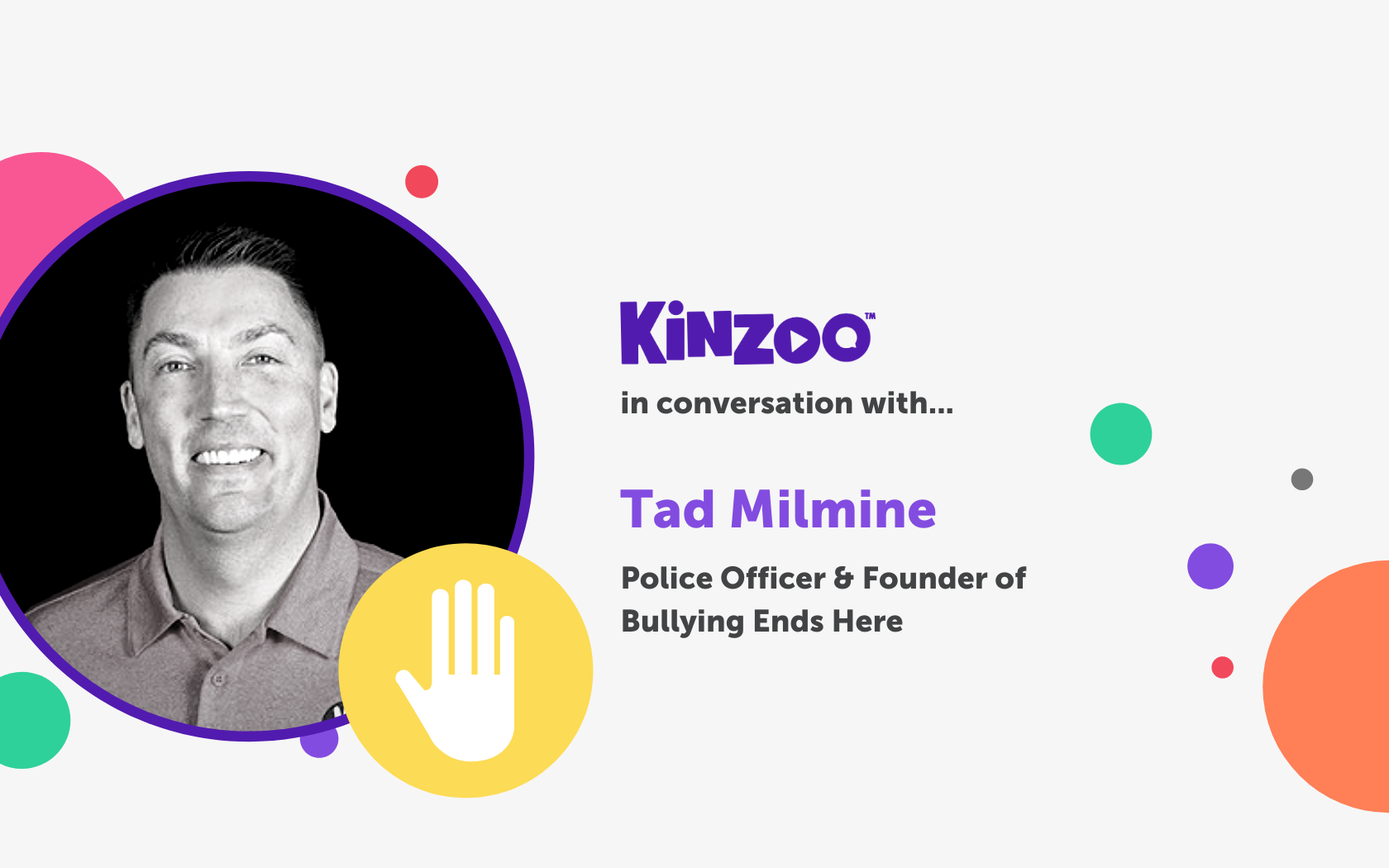 It takes a lot of strength to turn painful childhood experiences into something positive. And that’s exactly what Tad Milmine did when he created Bullying Ends Here. Despite years of relentless bullying at school and at home, Tad achieved his lifelong dream of becoming a police officer—but he didn’t stop there. He’s also a sought-after public speaker sharing his story of resilience. We sat down with Tad to learn how bullying has moved online—and what parents can do to prevent it.

Tell us a bit about your experiences growing up.

I grew up in a home where my mom and dad did not get on very well and they eventually got divorced. I stayed with my father and I didn’t really see my mother for about 15 years. My dad married a woman who moved into our home, and she didn’t believe that kids belonged upstairs, so I was not allowed to go upstairs. I was always alone in that basement. And the basement was four cement walls, a cement floor, very low ceiling, one light bulb, no heat, no air-conditioning, and I wasn’t allowed any toys.

Going to school was no better. The kids figured out I was very emotional and horrifically shy—and all they needed to do was call me bad names. They didn’t have the knowledge or the tools to understand that what they were doing was seriously wrong.

I started to close myself in. I always wanted to be alone. I wanted to be invisible. I was in a very dark place, and at 17, I ran away and I started my life on my own. I went to the government for help and they put me into their care. They provided me with shelter, money and resources to get my feet underneath me.

I always wanted to be a police officer, and that’s the strength that kept me alive for all those years. I met a friend who was a police officer and he gave me that little shove and said, “Just go try it. Just give yourself a chance.” I did and I’ve been a police officer now for 12 years.

What motivated you to start Bullying Ends Here?

I was scrolling through the news one evening in 2011 and a headline caught my attention: “Ottawa teenager takes his own life because of severe bullying.” There was something about this young man, Jamie Hubley, and the issues he faced when he was at school, his struggles with sexuality, with mental illness. I remember thinking back to a life lesson I learned at 17—that if I want a positive change in my life, it has to start with me.

And I thought, what a unique place I’m in: I’m an openly gay man, I’m a police officer, I’ve got the background, the story about being resilient. If I could just go to the local school, I’ll find out what it’s like to be there. So I picked a high school, went to a classroom during a group meeting happening at lunch and it turned out it was a GSA, a gay-straight alliance meeting.

A conversation started, and the questions they asked me were very deep. One of the teachers asked, “Can you come and talk to another class, and then the school?” And it kept building by word of mouth.

I don’t have any videos, no handouts, no razzle-dazzle. I stand there for an entire hour, often in front of thousands of students and you can hear a pin drop. (click to tweet)

Everyone at some point has felt alone or struggled. That’s all I’m talking about. I speak about Jamie in every presentation and I do it with Jamie’s parents’ permission.

Does bullying look the same today as when you founded Bullying Ends Here?

It isn’t so much physical or verbal bullying in schools anymore. It’s now shifting to online social media platforms. The problem that we’re facing isn’t so much the technology because the bully is still looking to feel a sense of control, but they’re not doing it the same ways they used to. Now they can be keyboard warriors at night thinking that what they type is never going to be held against them.

So we need to start educating people at a young age. But I have heard parents say, “I’m not looking at my child’s phone. That’s private, that’s their business.” Maybe it’s a little old school but I think this isn’t about privacy—this is about being a parent. It’s about education. Bullying is a repetitive behavior, over time. It would be easier to fix if parents were to monitor kids’ phones.

What can parents do to help their kids thrive online?

The internet is only as scary as we allow it to be. It’s actually a positive way to communicate, but for the kids that don’t have the experience, adults need to be hands-on until trust is earned—and that’s not going to be at the age of 13. (click to tweet)

TikTok, Snapchat, Facebook, Instagram—they all have minimum ages of 13 years old, but it’s amazing the number of kids that have these apps when they’re younger. So we have kids that are doing something that the experts in the field don’t suggest. I’ll ask parents, “Do you know what Snapchat is?” They have no idea and yet their child has probably been using it for hours that day.

We need to be holding parents accountable for what their kids are doing on the internet. As an adult, you should be checking out any new app your kid is putting on their phone: see what it does, learn how to use it and monitor it.

What’s the most common misconception parents have about cyberbullying?

That it’s not going to happen to their kids. They think it’s going to be another family, another school, another province and they don’t realize that it’s happening right there.

Bullying does not start and end at a school, it starts and ends at home. And when it comes to cyberbullying, we don’t need to look very far to see where the kids are learning how to be a cyberbully. Kids are looking up to adults.They don’t know what’s right or wrong yet, but if they see that their aunt or uncle or grandparents or parents are putting these things on the internet, well obviously that means they can do it too.

What advice do you have for kids when they’re communicating online?

If you wouldn’t say it in person, don’t type it. And as a society, we need to start filling in the blanks for kids. When adults see kids doing something wrong, we just say, “Don’t do that again,” and we leave it. But we need kids to understand why they can’t do that again, why it was wrong in the first place and what they can do better.

What can parents and kids do to protect their privacy online?

I always tell young people to Google their name frequently. Why wasn’t I accepted at that job? Why didn’t I get a callback? Why didn’t I get an interview? Well, it’s probably because there’s something on the internet that you weren’t aware of. Find out what’s out there. Chances are you’re not going to be able to remove it, but at least be cognizant of what’s there so you can get ahead.

I’m very open and I just put everything out there. I’ll deal with it if it ever comes back in some way, because that’s all it could ever be. But for kids, they don’t have that luxury. Parents are putting their children’s photos all over the internet and when that child goes to apply for a job, those photos are available for the world to see.

What are some positive ways that kids are using technology? / How can we ensure that technology is a positive force in kids’ lives?

We need to come up with a way to reward young people when they do something positive on the internet. We need to say positive things to kids instead of only acknowledging when there’s something negative. (click to tweet)