You're Never Too Small To Make a Difference 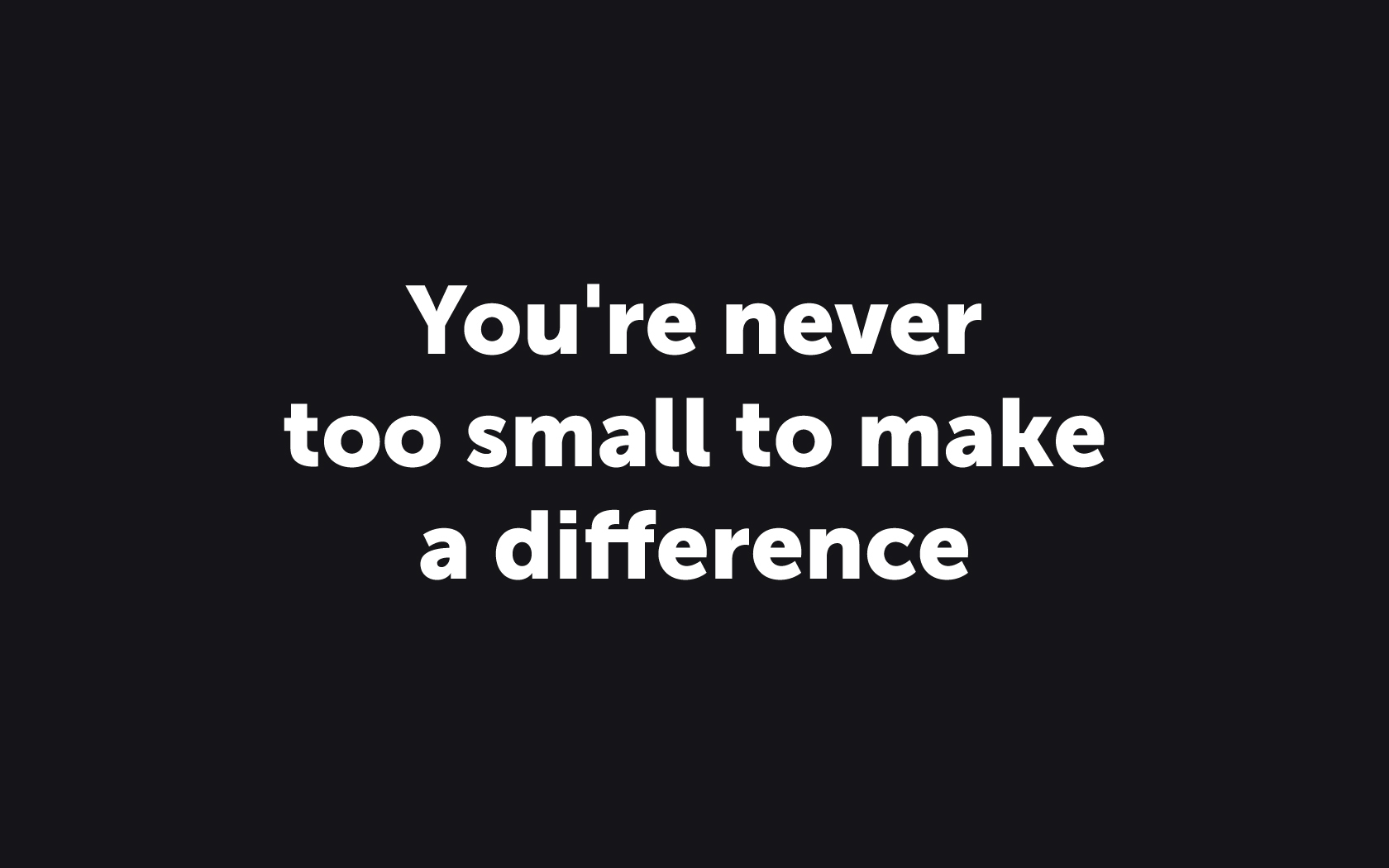 A little less than a month ago, the New York Times ran a story about a man who had just emerged from a 75-day silent retreat at a remote cabin in the woods. Within two hours of reconnecting with society, he sent a now-famous tweet asking what he’s missed. It was a strange moment, causing us all to reflect on the rather massive changes that had happened in such a short time: COVID transformed nearly every aspect of our lives within two and a half months. But, the surreal moment of reflection was short-lived. A new tragedy was imminent. Little did we know that within a few days, a criminal act would rob George Floyd of his life and lay systemic racism bare for all to see.

For many of us, our privilege means we don’t confront systemic racism in our daily lives. But the events over the past few weeks have brought us another seismic shift. This is a reckoning and an uncomfortable realization that we must actively find ways to do better. We’ve been reflecting on just that, asking ourselves difficult but necessary questions—and making a plan for how we can more effectively stand behind the values we hold dear.

What we stand for

Kinzoo is a company that’s focused on building a better world for kids. Tech companies have a history of excluding large parts of the population, and kids have certainly fallen into that group in the past. But we believe in inclusion. Kids deserve technology that empowers them and gives them a seat at the table. Children have agency, and we respect them. We believe in the power of small voices. You can learn a lot from children—but the most powerful lesson is that you’re never too small to make an impact. This is something we’ve been reflecting on over the past few weeks.

We all have a responsibility to create change. It’s been inspiring to see big companies use their platforms to engage in the conversation around equality, diversity and inclusion. As a small company, we’ve been thinking about the ways that we can make a difference as well. We don’t have a platform with hundreds of thousands of followers, and our team isn’t big. Realistically, we don’t have the reach of a larger company—but this means we’re still small enough to build the kind of company and system that upholds diversity in a meaningful way.

Where we’re at now

We set out to make Kinzoo an inclusive platform for families—no matter how they choose to define that. We’ve avoided using words in our app that force a narrative, like mom, dad, wife or husband. We’ve prioritized representation in our marketing, and our team is diverse in terms of both race and gender. But over the past few weeks, we’ve realized that we have opportunities to implement a better, stronger foundation for our company as we grow. And, we have a chance to more firmly entrench inclusivity into our company so that when we do have a big reach, we can make the biggest impact possible. For us, it’s not just about what we say when we speak up against injustice—it’s about the work that leads up to that moment. And this work is never done.

We’re committed to asking hard questions and interrogating the ways that we unconsciously uphold the status quo. If we’re not actively working to dismantle a broken system, we’re part of the problem. One of the areas we’re reflecting on is our Board of Directors and Advisory Board: there is a lack of racial diversity on both counts, and we’re making it a priority to address that moving forward. We’re also committed to including more Black, Indigenous and People of Color in our interview series and influencer marketing. And, we’re continuing to prioritize BIPOC representation in our avatars and stock photography across all our channels.

We’re listening, learning and taking advantage of all the anti-racism resources that have been shared by generous activists and educators as of late. We’re creating a library for our team and encouraging an ongoing dialogue across the company. We’ll continue to use our voice to speak up against racism and injustice today and in the future—and we’ll do so humbly and stay open to feedback as we grow.

My daughter is nine years old. I believe that the number one thing I can do as a parent is have meaningful conversations with her about race and racism. I’ve been thinking about my home growing up. It was not a happy one, and it was a home where racism was tolerated. It’s my responsibility to break that cycle for my own kids. It’s up to me to make sure racism is never normalized or excused—both at home and within my company. I want to spend more time listening—and especially listening to my kids. Their perspective is important because they haven’t yet accrued the years of conditioning that we have. They see opportunities and possibilities that we don’t. And, at the end of the day, all this work is about building a better world for our kids.