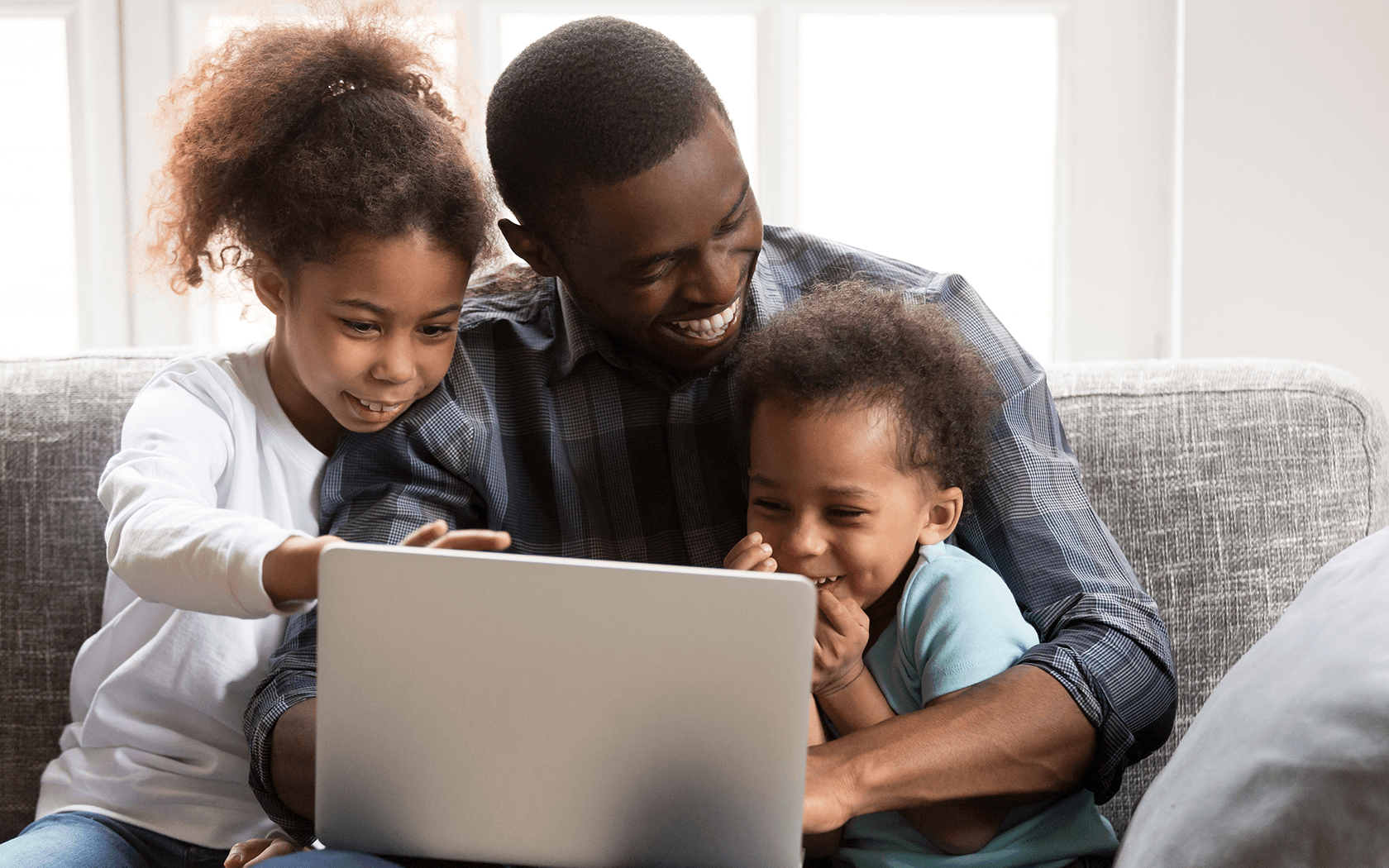 We went straight to the source to ask these four families how they use screens in their household.

Ask any parent with small children and they will tell you that there is no shortage of expert advice on screen time. A bevy of articles and reports offer guidelines for when to introduce screens, how much time and what kind of content to allow—and often, they don’t even agree with each other. In the absence of expert consensus, parents do what they’ve always done: figure out what works best for them. We spoke to four families* with kids under four, and asked them how they introduced screen time in their households.

When did you first introduce screens? Both Dan and I love television, and work from home—and we also do a lot of work on our phones, so there is usually an active screen in the household. We often have TV on in the background while Christine is playing, but she’s only started noticing in the last two months. We introduced kid-oriented shows when she was a year old, but it’s rare that she’ll sit with anything longer than five minutes.

Do you have rules for screen time? Not particularly, but we try not to put her in front of a kid’s show more than once a day. TV isn’t ever on during meals, because she gets distracted. That being said, if she’s had a rough day, and we’re all worn out from teething or lack of sleep, we will occasionally put on a nature program after dinner to help her (and us) wind down before we start what might be a hard bedtime routine—but those are few and far between.

What kinds of screen activities and content do you allow? Kid-oriented programming, usually from Netflix. We also let her take videos and pictures of herself. She’s fascinated by the camera and loves to pose. We also use Google Duo with her grandparents, who live far away. We call them on a daily basis, and we try to let her speak to them when she asks for her Yaya or Gumpa.

How did you view screen time before you had kids? Did anything change after? I know some folks have very strict rules around screen time, but we try to see it as a tool and entertainment piece. We also admit that screens are super useful in our lives and pretty integrated with how we live. Our goal is to have Christine gravitate towards play with others, toys or imaginative play over screens, but we’re aware that TV and screens can be great and fun when not overdone or substituted for real experiences.

What is your biggest concern about screen time? My cousins (now 16 and 19) spent most of their childhood inside on computers. My worry is that Christine would choose screens over experiences, so we take her outside every day, or do something new as often as we can.

When did you first introduce screens? We introduced screens when Charlie was two years old, but we felt that was quite young. We travelled a lot and we were trying to find ways to get through the flights. He wasn’t necessarily engaged with the screen, but we used it as a tool to keep him occupied during those long stretches.

Do you have rules for screen time? We don’t have formal rules, but Hannah and I are on the same page about how long Charlie can spend on a screen, and what he can do and watch. We don’t allow TV on weekday mornings—we prefer that he plays instead. On the weekends though, we’re more lax. We also prefer that he watched something educational, but Charlie has his own preferences. Unless it’s something that’s not appropriate for his age, we usually let him pick. Normally, we’re using kid’s Netflix, so the content is pretty safe.

How did you view screen time before you had kids? Did anything change after? I think I was judgemental of parents who used screens because I didn’t understand how full-on it was to be a parent. I spoke to my mom a lot when we were starting to introduce screen time, because I felt guilty about it. She talked me through it, and pointed out that I used to watch screens and I still turned out fine.

Has your child ever stumbled on something scary or inappropriate during screen time? What did you do? Sometimes Charlie spends time with older kids, and they like good-vs-evil cartoons that feature a bit more evil than a three-year-old is ready for. There are also some more violent shows, like Lego Ninja, that he really wants to watch. He’ll say he’s scared and hold his blanket up to his face, so we avoid those things.

Overall, has screen time been positive or negative for your family? It’s hard to say. I wouldn’t say there’s been a specific positive impact, but we have found that screens are the best tool when we travel or need some time to regroup as adults.

When did you first introduce screens? Margot’s was about 18 months old when we introduced a Sago Mini App, which we let her play on long trips or in restaurant lines. We also introduced her to some shows on Netflix. Before that, she’d been exposed to ambient screens, like a TV in the background.

Do you have rules for screen time? I would describe them more as guidelines, and they’re fairly flexible. We try to cap her TV screen time at two 20-minute episodes a day. iPhone and iPad use is only for special occasions, like trips and situations where we need to keep her quiet and occupied, like a visit to the doctors office.

What kinds of screen activities and content do you allow? Margot uses Sago Mini apps, a drawing app, Netflix shows, FaceTime with family, and looks at photos and videos with us on our devices. Sago and Netflix are probably her favourite.

How did you view screen time before you had kids? Did anything change after? Before she was born, I had a pretty strong anti-screen perspective. After she was born I realized the benefits of some controlled screen time. We also saw how it made us more sane and relaxed in high-stress contexts like flights.

What positive experiences has your child gained by interacting with screens? Lots! Language development, educational content that she finds fun, interaction with family that lives far away, and some bonding experiences with other kids. She chatted with another kid at the park about his PJ Masks hat and they pretended to be the different characters while playing together.

What is your biggest concern about screen time? It’s easy with Netflix in particular to let it play for too long, and I sometimes worry that we’ve created a crutch. We wonder, if she’s missing the opportunity to build patience and self-entertainment skills when I let her play with an app while we’re in a long queue.

Overall, has screen time been positive or negative for your family? Definitely positive. Screens are going to be a prevalent part of her world, and I think teaching her skills, good habits and confidence with them is ultimately a good thing. It’s also the only way she has a relationship with far-away grandparents, aunts and uncles, so that’s a huge positive.

When did you first introduce screens? When Jackson was 18 months or two years old, we started introducing screen time. Basically, we began using them after he started showing an attention span. Maya was exposed to screen time earlier, because we were already using them with Jackson.

Do you have rules for screen time? Very loosely, we allow about two 20-minute episodes of something before we shut it off.

What kinds of screen activities and content do you allow? Aside from watching kid’s shows, we let the kids take photos with our phones—Maya absolutely loves seeing photos of herself. Jackson can already use the phone like a normal tool, and he’ll play Mario Cart with Mark once in a blue moon. We also put movies on in the background sometimes, like if we’re making pancakes as a family.

How did you view screen time before you had kids? Did anything change after? We’ve always thought “everything in moderation,” and we still think that. It’s impossible to have extreme limits for your kids, and we don’t think it’s sustainable. We want them to understand technology, so we need to expose them to it. We won’t let them watch TV for three hours at a time, but we believe screens are good tools—they’re not evil.

What positive experiences have your children gained by interacting with screens? We find that shows are almost like a memory game for Jackson—he visually recognizes things and definitely learns things. A lot of the shows have good lessons as well, and after we watch an episode, we talk about the stories.

Overall, has screen time been positive or negative for your family? Positive. But it’s really how you decide to use them. We use them for education or leisure, and they never take up the majority of play time—it’s always complementary.